The Secret Behind Apple's Crazy Abilities

OK, maybe it’s not a “secret”, but bloggers are in a frenzy today after Apple reported $13.1 billion dollars in pure profit.

Apple is run by deep-seated principles from the late role model of mine, Steve Jobs. These principles have defined the products pushed out the door, but have also streamlined the organization into a buzz-crazy, super-secret, money-making machine.

People love Apple’s products because they work well and because they’re “magical”. But what makes them so magic?

Apple’s design team, led by Jonathan Ive is the world’s best. They have carved their own mountain of a niche in the industry by focusing on beauty. While all the other computer manufacturers were focusing on specs, Apple made a product so ridiculously good-looking that even Zoolander would use it. 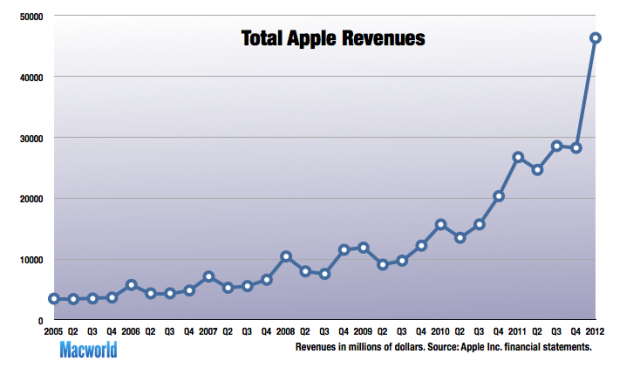 Look at the chart from Macworld. Apple’s huge climb to fame started when they stacked the deck on the iPhone and new technology. They didn’t follow the curve, they made it. The same design principles that were on Mac were ported to an entirely new device, and thus, although first-time users had never used a touch-screen phone before, it felt simple enough but retained it’s “magic”.

All the sudden, it’s the future seen in movies such a Minority Report. Point being, Apple makes products people naturally want to show to their friends and family.

Since Apple had such a unique position in the market and had high demand, they were able to charge extraordinary prices for their products (and still do, though now it’s less extreme). This is why Apple’s revenue is around $40 billion and their profit is $13 billion, while Walmart reports $100 billion and $3 billion. They sell on emotion, and people follow their emotion.

This process, also, in practice, created another great effect: people value things that are more expensive. We all do it because we’re materialistic jerks. If it costs more, we take greater care of it and focus more attention on it’s value.

Go make your business as magical as Apple! Try donating a bit to the UN hunger effort though if you get over $100 billion.